Our social media has gone crazy with “funnies” about Tony Abbott’s election win on Saturday.  He’s a very conservative man, and many of us are not happy with various aspects of his politics.  But he won in a landslide victory, and so we’re going to have to “wear it”.
The only thing I want to share about it, is claims that he plans on abolishing $4.5 BILLION in foreign aid.  Those in support of this say that we can’t afford to look after Australians AND people in other countries.  However, at the same time, he plans to introduce a $5.5 BILLION paid parental leave scheme.  Australia already has paid parental leave available in various forms, so why is this necessary?  And why would ONE BILLION DOLLARS not be enough of an improvement to the existing scheme, meaning we wouldn’t have to touch our foreign aid contributions?

Elsewhere someone suggested that Australians can’t see beyond their own privileged existence, with consumerism dominating our culture and to be truthful, I think there’s an element of truth to this.  40% of the world’s poorest people earn 5% of the world’s income.  22,000 children die each DAY due to poverty.  Almost a third of all children in the developing world are malnourished.  Nearly a billion people in the world cannot read or write.  Lack of water and sanitation affects billions of people.  These are not problems Australians are faced with.  But they are problems that exist in the world which we live in, and as a wealthy nation, we should be contributing aid to alleviate this suffering.

Dr Julia Newtown-Howes said it better than I can in her open letter to Tony Abbott on Saturday, which I’m copying below.

An open letter to Mr Abbott: Invest in foreign aid for a prosperous Australia
September 7, 2013

Congratulations on your election as Prime Minister of Australia.

As CEO of CARE Australia, which last year helped 3.6 million people across 26 developing countries, I welcome your commitment this week to better leverage NGOs’ experience to deliver on-the-ground support for some of the poorest and most marginalised communities around the world.

However, your decision to cut $4.5 billion from the foreign aid budget will have a devastating impact on people living in poverty across the globe and in many of our neighbouring countries. Australia – and Australia’s last Liberal Prime Minister, John Howard – made a historic promise to contribute 0.5 per cent of Australia’s Gross National Income to overseas aid as part of the Millennium Development Goals. While I welcome your commitment to achieving this goal, I urge your Government to set a timeline for doing so.

As well as saving lives and helping some of the 1.3 billion people living in extreme poverty, aid also fosters economic growth and enhances our region’s security.
If we do not tackle the problem of extreme poverty, already pressing problems such as conflict, mass migration and uncontrollable climate change will be made worse.
Australia will ultimately be judged by both the effectiveness of its aid program and the extent to which it meets those internationally agreed targets for aid volume.

Mr Abbott, we do not have to choose between the needs of Australians and the millions of people who live in poverty – we are wealthy enough to take care of both. This is a view shared by the Australian public.

An omnibus survey last year showed that almost 60 per cent of Australians believe that giving aid should not be a negotiable item in the Federal Budget.

Australia is not a generous aid donor, but we should be. Our aid program is helping to create a more stable and prosperous world in which Australia will flourish. As a prominent member of the international community, the current Chair of the United Nations Security Council and the 2014 Chair of the G20, Australia must pay a fair share of assistance to the address the world’s most pressing problems.

I urge you, as our Prime Minister-elect, to consider whether Australia, one of the wealthiest countries in the world, can afford to cut the assistance required to meet the humanitarian and development needs of the poorest. 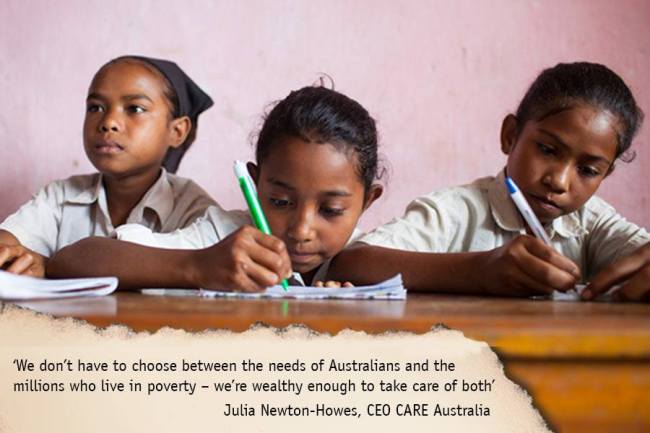 2 thoughts on “Australia has a new Prime Minister”