Kampong Cham is on the tourist trail for houseboats on the Mekong, which seem to anchor here at least a few times a week.  At the   riverside in the town centre is a stretch of about 300 metres of expatriate-targeting restaurants and cafes with westernised food options, meals of $4 instead of the local usual of around $1, fans, air conditioning and free wi-fi use.  They all have wide frontages opening out to views of the river and it’s tropical looking shores on the other side (which I hope to visit soon).  On a Sunday afternoon the wide esplanade across from these restaurants provides a sleepy setting where teenagers congregate on their motorbikes under the trees catching up with friends, families stroll, children fly kites in the wind and the odd mobile, canopy-covered produce shop parks in hopeful wait of a customer.

Tonight I cycled from work to the riverside to sit at a cafe and make use of their free wi-fi.  My cycle took me through the centre of town, past horses, chickens, hens and roosters, all getting on with life amidst a thousand motorbikes and tuk tuks who debated right of way politely with me at the busy intersections.  A houseboat is anchored at one end of the esplanade, and dozens of traders have appeared in their sidecar shops hoping to feed the family tonight, courtesy of a tourist or two.  It has transformed the area from a sleepy village feel, to a small but bustling tourist hotspot.

Below are some photographs from the internet of the “mobile shops” I mention.  Some are sidecars to motorbikes; some are long flat platforms carried in tuk-tuk style by a motorbike; others are hand-driven much like a very large wheelbarrow. 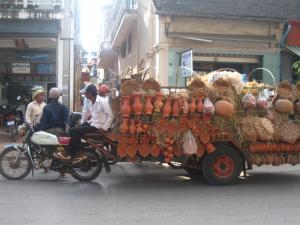 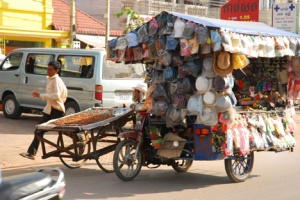 Today I went to work without my predecessor for the first time, and things went very well.  My nursing team are lovely, as is my translator and shadow who not only knows the systems inside-out but has a good grasp of his own culture as well as mine, so he will be a great safeguard against many potential problems.

The highlight of my day was an hour spent in the Tuberculosis Laboratory where I received an orientation to their systems.  I have spent years reading about the microbiology of Tuberculosis, a unique and highly adaptable bacteria which often appears to be winning a microscopic battle with human populations.  Today I had the privilege of seeing many of the procedures and tests I know about but had never experienced outside of either a book or the macroscopic, patient level.  It was exhilarating to look down a microscope at Tuberculosis for the first time.  The laboratory is of a high quality, first world standard, with microscopy (Ziehl-Neelsen and Aurimine staining), solid and liquid cultures, GeneXpert PCR and Drug Sensitivity Testing (DST) available.  Most third world laboratories rely solely on microscopy, which is a useful but imperfect test and does not complete a diagnosis for Tuberculosis, rather only indicates the probability.  It’s use is determined by it’s cheap cost in low resource settings.  As with so many things, Tuberculosis has low prevalance with high quality resources in the first world, but in the third world TB has a high prevalence with extremely limited resources.  Kampong Cham breaks the cycle of low resources, a rare and notable exception for a population experiencing such high rates of Tuberculosis disease.

Another interesting aspect to my day was attending a case management meeting for Drug Resistant TB cases, where patients’ diagnoses, medical management and social circumstances are all discussed in a multi-disciplinary team.  The poverty here is something we cannot imagine in places like Australia, with people expressing concerns such as being unable to afford “being sick” because they need to go to work to feed their family; family members taking over the role of breadwinner whilst the usual breadwinner spends time in hospital with severe illness; family members required to attend the hospital as caregivers but having to balance this with their family and money making responsibilities.  I encountered new drugs and considerations which have all placed me on a very steep learning curve.

Yesterday I met a 12 year old boy who was admitted with a respiratory infection.  He was sitting upright on the wooden slats of his otherwise unfurnished room, forcing his drooping eyelids to stay awake, gasping for every breath, the pressure from each inhalation sucking at his ribs and throat.  Nasal prongs were delivering oxygen into his labouring lungs and an intravenous line was delivering fluid and broad spectrum antibiotics to his emaciated body.  He attended the hospital with his mother and older sibling, who have been homeless due to the floods and are sleeping on bamboo mats on the old and rough concrete ground next to his hospital bed.  His mother spoke openly to me (via my translator) with a friendly smile about his health, the diagnosis of Polio which caused his wasted legs to be useless from an early age, and his current symptoms which seem to have an acute onset (so perhaps not TB).  This morning I visited them again and was thrilled to see him alert and no longer agitated, with much improved breathing.  I had a small notepad with 12 colouring pencils for him, which I brought from Australia.  My translator explained that I had a gift, and I placed it on the bed for him.  He and his mother both responded with the Cambodian expression of respect – hands in a prayer motion, fingertips to the chin, and a slight bow of the head.  The respectful way of saying hello here is to perform this action and say “Chum reap suor”, so I call the action “Chum reap suor”.  As I left the boy’s room this morning, a mother and her 4 year old daughter in the neighbouring bed both farewelled me in the same manner.

A few nights ago I was using the wi-fi at one of the riverside restaurants and I asked the young, smiley waiter for a glass of Chardonnay.  A few moments later I was presented with a red wine, which I thanked him for (because what the heck!), using the “Chum Reap Suor” motion, and he walked backwards away from my table, repeating “Chum reap suor” many times until he had to turn and see where he was going!

The Cambodian people over and above any other aspect to this experience, have been the highlight of the last ten days.

10 thoughts on “Houseboats on the Mekong”