The average number of individuals directly infected by one infectious case during the entire infectious period of a specific disease is defined as the basic reproductive rate.  Infectious diseases have individual characteristics, such as the route of transmission and the number of organisms needed to cause infection, which make this calculation different for each disease.  Variables such as population immunity will also affect the reproductive rate.

One of the most contagious human diseases is Measles, an airborne virus which spreads rapidly in non-immune populations.  A person with Measles is infectious from four days prior to the rash appearing, until four days after the rash appears.  Assuming contact in a non-immune population, the index case will infect between 12 to 18 people during this short period.  Today we are seeing outbreaks of Measles in certain first world populations who have become opposed to vaccination.  It also causes outbreaks in conditions of overcrowding such as refugee camps where people have migrated from places with disorganised health care systems where vaccination programs are either absent or unreliable.  A high rate of vaccination in populations is needed to prevent this rapid transmission in such a potentially deadly disease.  In brief, this is why organisations such as Medecins Sans Frontieres run mass vaccination programs in refugee camps.

A single case of Influenza will infect between 2 and 3 non-immune people during the infectious period which lasts approximately eight days.  In Australia we see 10,000 people hospitalised with Influenza each year and up to 4,000 deaths.  This often comes as a surprise to people who have come to consider Influenza an unimportant disease, perhaps because of the over-use of it’s name in people suffering from a common cold or other mild winter-associated viral infections.  Epidemiologists keep a very close eye on Influenza patterns in populations as it is highly likely to cause the next global disease pandemic due to it’s ability to spread rapidly whilst constantly mutating into potentially more virulent strains.  In 1918 the world saw an Influenza pandemic known as Spanish Flu, which killed an estimated 20 to 40 million people.  The next time this happens is a matter of when, rather than if.    I am a strong proponent of Influenza vaccine and one of my biggest work frustrations is when I am unsuccessful at convincing Influenza Doubters that there is good reason to have the annual Influenza vaccination.  Those of us who are young, strong and healthy can assume we don’t need the vaccination but part of the purpose of vaccination is the protection of vulnerable people by reducing disease transmission.  Personally I would hate to be responsible for spreading a disease which may not threaten my own health, but which kills thousands of susceptible people.

Ebola is considered infectious for the duration that a person is unwell with symptoms.  Symptoms of Ebola in the West African outbreak last year, lasted an average of ten days before patients either recovered or died.  During this ten day average, each index case infected between 1 and 3 secondary cases.  The outbreak was only contained when appropriate preventive measures were able to be implemented, such as early diagnosis and isolation of cases.

Tuberculosis is vastly different from the above three examples of viral infections which spread quickly and have very short incubation periods.  Not only is Tuberculosis a bacterial disease, requiring much closer and more prolonged contact to spread between people, it also has a unique and complicated incubation period which depends on multiple host factors such as age, presence or absence of other sicknesses and risk factors such as smoking, certain immune-suppressing medications etc.  The bacteria is slow-growing and usually causes a slow onset disease in people unable to contain it.  TB disease can present in many ways, with 70% of all TB disease occurring in the lungs, but 30% occurring in other parts of the body.  Only a proportion of TB disease is infectious, but when an index case does have infectious TB, World Health Organisation estimate that on average they will infect between 12 to 18 people per year (assuming a person remains infectious with untreated disease).

Despite it’s much slower reproductive rate than many other diseases, and despite the human immune system’s ability to contain the bacteria in up to 90% of people infected, TB is nevertheless the world’s leading killer over any other single infectious organism.  Because of this, it causes fear and anxiety across the globe.  In countries of high prevalence, people have often watched loved ones or neighbours die from TB, which leads to fears about transmission resulting in stigma and discrimination.  In wealthy countries similar concerns happen thanks to the disease’s reputation, combined with low incidence rates which have made it a mysterious disease that few people understand well.  This is exacerbated by the fact that the disease is complicated in the way it interacts with human hosts, sometimes causing disease whilst other times not; and causing a very wide range of disease presentations.

Recently a friend working as a photographer in Cambodia sent me this message:

Hi , visiting a man living alone with TB this morning, some of the saddest photos I’ve taken so far. He is taking medication but has to walk from the community to the bridge and then take a remorque for 5 km to the TB clinic, every day, because they don’t want to give medication for more than a day at a time. He leaves at 5am in the morning, returning around 11am. We are trying to help, with food and shelter and maybe finding a clinic that is closer. He is sharing his platform with another family, a grandmother who had a stroke but is looking after three grandchildren while the parents are working. I’m not quite sure how easily TB is transmitted, so we just asked him to wear a mask all the time. He spends his nights sitting up because it is too painful to lie down. And apart from a really lovely young couple, the rest of the neighbours don’t want him out of his platform. I thought that maybe if we could have like a simple information meeting about TB, people would not be so afraid of him… Do you have anything, or MSF, for that purpose? Like with drawings for example. 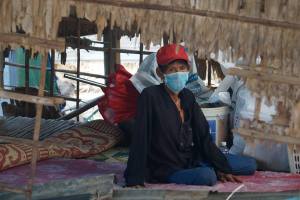 In the poor world, where 95% of all TB cases occur, stigma, social exclusion and discrimination such as this are a common experience of TB patients.  In the rich world, where TB is far less common, the same fears exist but often steeped in incorrect assumptions about the disease.  A quick Google News search of Tuberculosis this morning comes up with the following items:

Nowhere in the first page of Google news feeds on Tuberculosis is there a headline about the 95% of TB patients living in poverty with challenges such as the elderly Cambodian man my friend is trying to help.  Contact tracing in places such as Cambodia and East Timor is a very limited activity as services buckle under the pressure of active disease.  By comparison, the rich world offer the opposite extreme, spending almost all of our resources on trying to identify contacts and reduce their risk of developing disease.

TB is a curable disease, with the exception of MDRTB and XDRTB which present challenges for treatment and cure.  Yet, almost exclusively because of poverty in far away countries, it remains one of the world’s biggest public health challenges.  In the 1700s in England, 1 to 2% of the population died of TB.  The reduction of poverty and improvement in living conditions across the country, all but defeated this and many other diseases.  History has demonstrated repeatedly, that when social conditions improve, so does population health.  Instead of talk about closing borders and stopping travel, as some politicians did during the Ebola outbreak last year, we should be promoting information and involving ourselves in trying to make the world a more equitable place for everyone.

One thought on “Disease and Discrimination”