Traffic accidents are the leading single cause of death in Cambodia.  In 2015 there were 2,265 deaths by traffic accident and 15,000 injuries, 40% of which were serious.  Knowing the health care that is available here, I dread to think how much cumulative serious suffering these thousands of injuries cause each year.  I think of these dangers everyday as I cycle, walk and tuk tuk on the pothole-ridden, tumultuous streets of Phnom Penh.

This week alone I witnessed two minor accidents in the space of 30 minutes, ricketty-tuk-tukking from one side of the city to another.  In both, a motorbike collided with a larger load.  The first happened in the lane traveling alongside us on a busy boulevard.  A moto piled wide with a bulging sack of unknown produce clipped the wheel of the moto beside him.  The hit moto driver skidded sideways onto the asphalt right in front of a truck.  Thankfully we were all traveling at about 20km/h so the truck was able to stop in time and the driver bounced onto his feet without injury.  The second accident had already played out as we passed, a moto lying on it’s side underneath the front wheel of a Land Cruiser, both drivers apparently standing on the roadside, counselling or arguing with each other.

There are tricks to traveling on wheels in Phnom Penh.  My initial perspective was that chaos reigns.  The more I cycle, the more I realise it is an organised chaos with it’s own set of rules.  I am just a foreign player in this purring labyrinth of weaving, winding traffic.  Becoming familiar with the streets between home and office, I have changed my route to avoid as many potholes as possible as they interfere with my game plan.  You can predict anything if you are vigilant enough, except what someone will do when a pothole appears in front of them.  Yourself included.  Avoiding potholes is paramount to staying safe.  Everything else is a piece of cake.

Some of the unspoken rules include:
When turning a corner, pass around the outside of those going straight, which cuts them off but ensures they see you.
When someone passes you to turn in front of you, move with them.  Turn into the corner with them and once they’ve passed you, veer back out onto the road you intended to be on.
When crossing intersections on a two-wheeled vehicle, your best option is to move beside a four-wheeled vehicle going in your direction.  No one is driving any faster than you are cycling and the four-wheeled guys make a perfect shield.  Four wheeled vehicles can include motos pulling wooden trailers of produce, walking sellers pulling carts of fruit, and any other number of carts and pulleys being pulled in any number of ways.
If there is no four-wheeled shield nearby, move into the intersection slowly and weave your way around everyone else, who will weave around you.  This is where the potholes get in the way as you can think you’ll weave one way, then you or someone else swerves unexpectedly to avoid a sharp edged rut.
When turning corners, cross diagonally towards the corner you are aiming for, from as far away as you see fit.  You will find yourself cycling along the wrong side of the road for as far as you think it helps, the main purpose being to get across the road during a gap in traffic.  Everyone else is doing the same, so always expect and accept to see vehicles traveling towards you on the wrong side of the road.
Weave and swerve, look in all directions constantly, keep your heart in your mouth but remember everyone is going slowly so it’s hopefully going to be okay!
Finally?  Never visit Cambodia without travel insurance!

In keeping with the topic of accidents, last week in a remote province nine children piled into a single person canoe and paddled out to pick lotus flowers.  The boat capsized and seven of the children drowned.  A few weeks earlier, Caz traveled with me by tuk tuk to visit Chom’s wife via a few other stops including Paula’s village.  We bought a bag of rice to deliver to a poor family I met through Chom, along the way.  Just beyond some ponds of lotus flowers in bloom, we pulled over at their riverside hut and the mother of four appeared at her little doorway with very swollen eyes.  Her three year old son, whose malnourished state I wrote about eighteen months ago when I last visited them, had drowned the day prior, at the lotus flowers.

According to WorldLifeExpectancy.com Cambodia ranks 28th by list of nations with highest drownings, at 8.41 drownings per 100,000 per year, which according to SwimSafe.org  equates to 6 children drowning everyday in this one small nation.  In Asia as a whole, a child drowns every 45 seconds!  It is hardly surprising given the poverty set amidst so much water.  Swimming with Khmer colleagues at a conference three years ago, one of my staff asked me how I had learned to swim.  When I said that I had attended swimming clubs from a very young age he replied “we don’t have those in Cambodia, in Cambodia your swimming lesson is don’t-swim-drown”.  He was laughing but the message was a sad one and yet another example of the difference in opportunity and security that our economies provide to us.

Today I am in Kampong Cham for a number of reasons, one of them being a visit to the house in progress.  The builders (the girls’ cousin and his elderly father) were up there in their bare feet and bare chests, hammering and sawing away in the sun.  When I asked how they got up there, Dan informed me they climb the foundations! 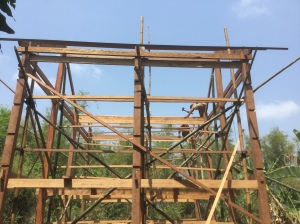 2 thoughts on “Traveling as a Team”