Friends in Alice Springs live on a rural property where they breed their own poultry and the occasional larger animal.  Oneday last year I was standing in their chicken coop, a glass of wine in hand and about 50 chooks at my ankles, when my friend approached me holding a bedraggled cockerel.  “Do you think he’s normal?”, she asked, pointing out some bald spots, mis-shapen claws and a gloomy countenance.  Hardly the expert, I replied with an uncertain tone but it was enough to reinforce her opinion and she instructed her husband to “put him out of his misery”.

The bird was secreted around the corner of the shed.  At the sound of an axe making contact with a hard surface, I peered around the corner just as Dad told his 15yo assistant to reposition their still-intact target and another – successful – blow was administered.   To this day the memory torments me.  Yet I’m just as likely to have eaten chicken for dinner that very night.  Here in Cambodia it’s a daily sight to see motos encircled with live chickens hanging upside down from a frame or pigs laying upside down behind the moto driver transiting them to their demise.  I’m always sticken by their plight, yet they feature frequently in my diet.

This morning my phone rang at 7am.  Paula’s 17yo brother, I will call him Mark, is a star student and the family have hopes he may further his education and acquire a career with a good salary.  This is very dependent on a number of factors, including the family’s financial ability to offer him continued education.  Five evenings a week, he and his 12yo brother attend a $4/month/student English school at the town nearest their village.  The family are unable to sustain this cost, so I sponsor them with six monthly payments of $48.  Mark cycles the 5km journey on a busy rural highway with his younger brother on the carrier, where they attend a two hour evening class before the return cycle home in the dark.  Native Cham speakers, English is their third language, after Khmer.  Mark was on the end of the line this morning.
Helen?
Yes?  Mark?
Yes.  Today Paula come to Phnom Penh.
Oh!  Can I see her?
Sorry?
Can… I… see… her?
Kunaiseeha….?
Where in Phnom Penh?
Sorry?
Ummmm…. How… can… I… see… her?
Sorry?
I switched to my shameful level of introductory Khmer and said a Khmer person would call him.  Thanks to Win, my old translator, I learned she was coming to Phnom Penh, staying near the big mosque behind Calmette Hospital for one night, and going home tomorrow.

They wouldn’t call to tell me if there was no plan to meet me, so I waited.  A few hours later Win texted to say that Paula had arrived in town and he had told her that when I am ready I will meet her.  After lunch I called her and with more introductory Khmer, explained I was coming soon.  I rang my tuk tuk, who meets my introductory Khmer with introductory English and we somehow manage.  Leaving the house I informed my American colleague/housemate that I wasn’t sure if I might be going to “the big mosque”.  She agreed my baggy clothes and the scarf packed in my bag should be respectful enough for such an occasion and I met my tuk tuk guy outside.  We rang Paula and upon hanging up he quizzically informed me she was at Olympic Market.  Okay, so that is nowhere near Calmette!  Laughingly we made our way to the market.

After a short wait surrounded by bustling market scenes and sounds, Paula and a friend exited the crowded bazaar carrying large plastic bags bulging with clothes, purchased for onward selling at their local market.  They jumped onto my tuk tuk and he asked where we were going.  I didn’t know and I asked the girls.  They didn’t know!  So I suggested my apartment but I wasn’t particularly comfortable with this idea.  They live in an impoverished environment and my apartment is a large, fifth-storey, two bedroom condominium looking over the rooftops of Phnom Penh.  I asked if they drink coffee?  Yes.  So we started at a cafe near to my place, but it was crowded and when Paula’s friend uttered the word “pizza”, before Paula followed her with the word “hamburger”, I knew where to go.  We returned to the tuk tuk, who was looking after their bags of shopping, and he drove us around the corner to a western style restaurant where the main meals average at around $4 to $5 (beyond the reach of most locals).

As I called out to tuk tuk that we had arrived, the girls looked at the menu board photographs at the door, excitedly clasping their hands together and saying “thank you” in English at me.  Eternally astonished at the difference between my life of “having” and that which I have come to know as an intimate bystander, of “having not”, I am also eternally grateful for the opportunity to share in such small ways, the comforts that I take for granted, with those for whom these comforts cause such delight.  After a conversation with the waiter, to confirm that there was no pork “because we are Islamic” (explained from underneath their hijabs as though we might not realise!), Spaghetti Marinara eaten with chopsticks was the girls’ choice.  I was highly entertained by the amount of selfies, giggling and posing the girls engaged in during the meal.  We chatted and laughed in broken language, and I will see Paula again next month when I visit during a long weekend.

Yesterday I visited Wat Opot.  A couple of different friends were also there, one of them with his drone which he flew over the kilometre-squared residence, taking aerial video and mapping 3D images of the property while eliciting much excitement.  I was last at Wat Opot two months ago, when we met a new HIV orphan of about twelve years old who was severely malnourished and barely able to walk.  With only a few short weeks of anti-HIV medication, adequate nutrition and some TLC, she is unrecognisable, full-faced, active and happy.  Wat Opot’s slogan is “The things we’ve gone through together” and while in the past, much of this refers to tragedy, today they mostly share positive transformations of children whose lives have been spared.

Notes I made along the route to Wat Opot include the constant purr of traffic as we wound through narrow residential lanes to avoid using the main, crowded boulevards.  Life in these streets displays the impressive productivity that springs forth from impoverished communities who must find a way to survive.  Many thousands scavenge for recyclable cardboard, plastic and cans, pulling barrows piled high with refuse and stopping to forage through garbage bags left on the street.  They often have a small rubber air-filled horn in one hand which causes an almost comical squeak, alerting their presence to anyone with recyclables to throw away.  I regularly wonder what sort of earnings these people, who walk the streets at all hours of the day and night, might make?  Often small children travel in these carts behind working parents and siblings, some of whom are themselves, disturbingly young and likely not in school.  Very elderly men and women, often hunched over by spines deformed by illness or over-work, are not exempt from needing to earn a living.   The carts are often made of welded steel but it’s also common to see very rudimentary wooden barrows in use.  They travel in the thick of teeming traffic, meandering between vehicles in often dangerous conditions. I could write about so many other equally intriguing street scenes but I feel these trash collectors deserve recognition. 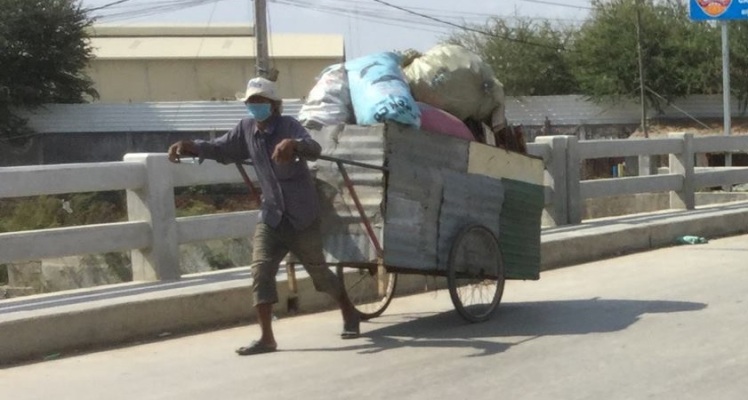