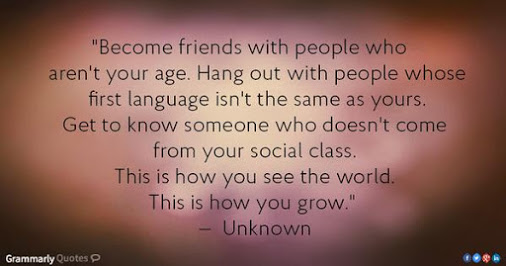 One morning about 13 months ago I was unsuccessfully trying to help Mum with her iPad.  The Siri feature kept turning on at inopportune moments so I was showing Mum how Siri works, as well as how to turn her off.  I turned Siri on to ask her a question just as Mum spoke, which of course interrupts and confuses Siri so I said “you have to be quiet” to which Siri responded “that was rude”!  I liked Mum’s iPad so much that I bought myself one passing through Duty Free on my way home from that visit.  Siri occasionally turns on inconveniently and I have always ignored her but this morning in a moment of distraction I began messing with her.  Our conversation went like this:
Me: Do you have a boyfriend?
Siri: There was a Roomba once that followed me around everywhere
Me: Do you have a boyfriend?
Siri: No but drones are always trying to pick me up.
Me: What did you eat for breakfast this morning?
Siri: I don’t eat.  Though if I did, I’d eat chocolate.
Me: Where do you live?
Siri: Here
Me: What is the average income in Cambodia?

This makes sense of Seth’s excitement the other day at holding multiple $100 bills in his hand, and of his elderly father joking with me that he would like to visit my country but he would have to stowaway.  I have no idea how many aeroplanes I’ve traveled on or international journeys I’ve made in my life, and there’s a reason for this which is the same reason as this equally deserving man has never traveled – our fortune at birth.  This iPad which I purchased on a whim for the sake of entertaining myself, cost in the vicinity of an average Cambodian person’s annual income.  Yet Cambodia doesn’t come anywhere near on the list of countries with the lowest GDP.

South Sudan comes in lowest, at an average of $210.28 per person per year, compared with the highest in Luxembourg, at $105,829.05.  In a list of 189 countries at StatisticsTimes.com Australia sits as twelfth highest per capita GDP and Cambodia sits at 34th lowest.  There are so many more details than this and the situation is not all doom and gloom, for example in 2016 the country with the highest GDP growth rate was Iraq, at 10.3%.  Cambodia came in at a global seventh with 6.99%.  Nevertheless those of us from high income countries, even if we are not earning a high income, have all sorts of benefits which most of the world do not, such as access to minimum standards of education and health, back-up systems such as welfare, imperfect yet functioning law and order, or even just connections within our community.  That is not to say we don’t have poverty and struggles, which we do.

Social connections are perhaps one of the most significant enduring forces for all of us, influencing our lives in subtle but powerful ways.  Rav’s comment about being happy if I help Seth because of the positive domino effect he expects it to have on him, his family and networks was a wise and egalitarian notion.  It impressed me in the same way as the communal approach of the Cham people who, from Paula’s village to Seattle, rallied around Paula, her mother, Samantha and I, forming the strongest support network I’ve ever been a part of.  In high income countries, private schools make a good example of my point, with one of the strongest reasons to aim for private school enrollment being the social networks, thus potential opportunities, it will expose your child to.  Rav recognised this when we enrolled his sons in an English school he would have been otherwise unable to consider, saying “our children come to school by tuk tuk but everyone else comes in nice cars.  This is unbelievable for my children”.

Just as it’s not all doom and gloom, it is also not just a one way street.  Knowing and socialising with people from other places, cultures, languages and networks can only amplify our insight and appreciation of the world.  Yesterday I spent six hours in a car with Samantha, her mother, sister, two children and our Khmer driver, surrounded by Khmer language.  Arriving at Paula’s home, we feasted on Islamic food, surrounded by Cham language which was translated to Khmer before it could be translated to English for me.  I sat silently most of the day, enjoying the hustle, bustle, smiles, children, food and hospitality of dozens of people.  Only when I saw the photographs on my iPad this morning of my rumpled, overheated self, did I comprehend why my hosts insisted on taking turns to wave a piece of cardboard at me like my own personal punkhawallahs, despite my insistence that it was unnecessary!

Just before the call to prayers reverberated over a megaphone from the mosque across the road, Paula’s grandfather said something to Samantha, who looked at me and said “he want to say many things to you but he cannot”.  I replied that it is difficult that we can’t speak, but I was so happy and thankful to simply be there with him.  He nodded in agreement before leaving to the mosque.  A small orphan was sitting beside me, punkhawallah-ing.  After his parents died, a sickly single woman with no children took him in as her own in typical Cham rallying fashion.  I asked him about school and was informed that the school (inside the mosque grounds) teaches Cham, not Khmer.  I asked something about the Koran and suddenly an old worn out copy appeared.  On instruction from his carer, the reluctant seven year old read a couple of lines to me, all in Arabic.  Everyday I continue to learn new and exotic things in this captivating place. 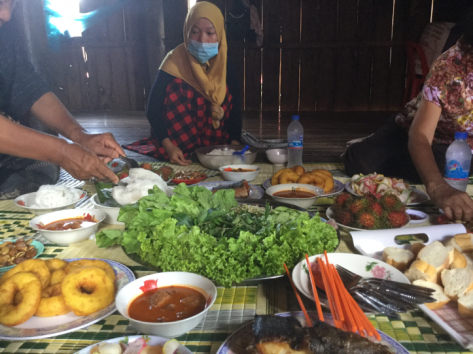 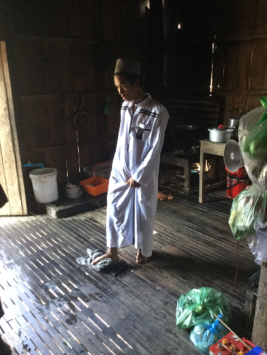 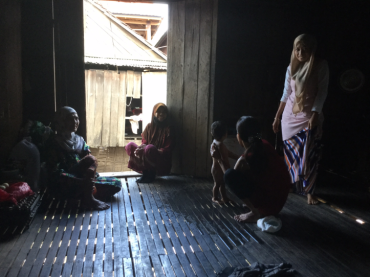 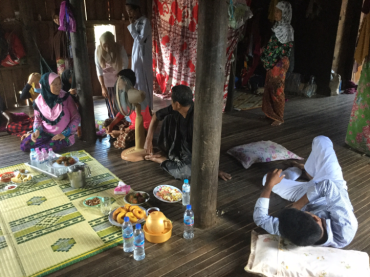 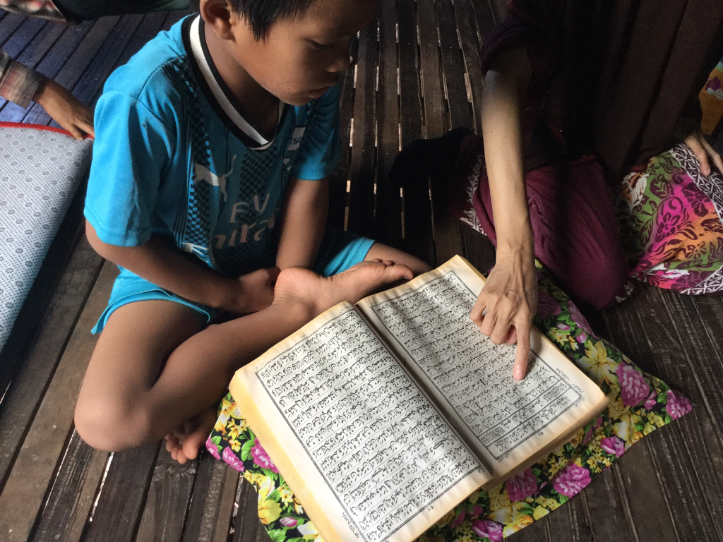