I’ve left work behind for a few days of rest and recreation in the city, my main aim being to have the mop of discoloured shaggy hair on my head revived into something half-tolerable again.  Witnessing the suffering of our patients is often heart-wrenching and this week the severe chicken pox blistering of a patient had really taken it’s toll on my precious first world spirit.  Severely immuno-compromised, she had the misfortune of being visited by someone with a mild case of chicken pox a few weeks ago.  An otherwise healthy person would have the ability to remain healthy in the face of such exposure, perhaps experiencing a mild or even moderate case of chicken pox rash.  But with HIV already ravaging her immune system, even if she had some immunity from childhood, she was at risk of severe disease.  Initially appearing as a mild case, within days her entire skin surface, as well as the mucous membranes of her eyes, mouth, throat and intestines were blistered with large, fluid filled vesicles causing extreme pain and placing her at risk of many complications from diarrhoea (and resulting dehydration/exacerbated malnutrition) to blindness.  A very young woman, she has already faced the recent neonatal death of her first child, probably due to HIV which she was diagnosed with after the child’s death, and now multi-drug-resistant TB.  In my early adulthood I was travelling, working, studying, socialising and generally living a charmed life, unaware that in most parts of the world such seemingly normal activities could only be fantasised about, and that suffering such as this dominates the lives of many millions of people.

The streets of Phnom Penh bustle with an array of motorbikes, tuk-tuks, high-seated bicycle taxis, overloaded trailers, children and women pushing hand-driven wheelbarrows of shellfish, cardboard and other consumables which to a “first world brain” don’t seem saleable.  The air is so moist that you imagine the waters of the Mekong rising into invisible clouds which cloak the city in their wet heat.  An open bar with plastic tables and chairs is overflowing onto the footpath with local men shouting boisterously at the boxing match on the television.  Young women tend to wooden wheelbarrows on the street outside, babies sitting in cardboard boxes at their feet on the roadside.  Amputees hobble amongst the crowds with their caps outstretched hoping to find someone willing to help them obtain a meal.  Moto-taxis and tuk-tuks all vie for the foreigners’ custom, with calls of “Hello Madame” coming from all directions.  One tuk-tuk driver does not speak English and when I say the street number I want to go to in Khmer, he shrugs his shoulders with a kind smile, letting me know he doesn’t know how to get there (or perhaps more likely, that he doesn’t understand my Khmer).  So I walk on in the wet air, drops of sweat landing from the top of my head onto the top of my earlobes, giving the sensation of a fly walking on my ear.  Soon enough another tuk-tuk appears and negotiates the $2 fare with me, starting at $4, and when I say it usually costs $2, offers to meet me at $3.  I accept and am relieved to step into the shade of the curtained open cab as he winds and weaves through the traffic.

I find my hairdresser, a flamboyant young man who knows me now, at the salon.  He colours and cuts my hair while his sister wipes my brow with wet cotton wool and another assistant keeps my glass filled with ice and watches me closely to make sure there is nothing else I need.  Kim meets me and decides to have her hair done as well, so I wander around the corner to have a $2 manicure while I wait for her.  I come away feeling half-human again, with a neat hairstyle and pale pink nails, after months of self-neglect.

We walk to Central Market and organise our bus tickets home for tomorrow, then find a tuk-tuk driver to wind-and-weave us back to the guesthouse, enjoying the shady breeze as we soak in the novel sights, smells and sounds of the unfamiliar city. 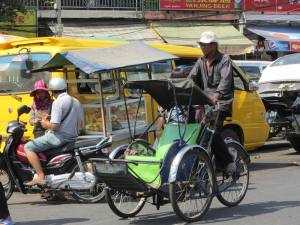 On Saturday night a crowd of our expatriate colleagues have arranged a barbecue at the house of a young French family.  Three of us climb onto the MSF-supplied bicycles and the watchman opens the compound gate for us.  We exit the high walls into our small alleyway, pedal past neighbours sitting on the rubbled roadside in the dark, hold our breath over the smelly canal lined with piles of domestic refuse, some of which has blown into the stagnant waters.  Making our way across busy intersections, we wait for a fleeting gap in traffic, take a deep breath, mumble a few expletives and pedal at full speed, laughing at each others’ reactions of relief as we reach safety on the other side.

As we arrive at our destination, over the road a small crowd of people are sitting on floor tiles inside a wide open doorway of a small house front, sharing a meal.  I wonder if it’s a tiny informal restaurant, or perhaps a private family gathering.  The watchman opens the gate and we enter a beautiful tropical garden of tall trees looming over a large wooden dining table.  Large opened French doors lead into an open plan living room / kitchen area which seems to be an extension of the shaded garden.  Cocktails, beer and wine are served, meat is barbecued, children run about at our feet, and the conversation flows.  At midnight we head back to the MSF Compound, feeling much safer courtesy of a little dutch courage and a lot less traffic.

On Sunday morning Kim and I meet at the top of the stairs and climb down to ground level, the watchman lets us out and we follow an orange robed monk under his yellow umbrella along the alleyway and around the corner to a local restaurant for brunch.  The wait staff look about eight years old, but when I ask one of them in broken Khmer, he thinks for a moment before replying that he is “Tdap param muey” (sixteen).  We surmise that the pause before replying was a recall of the age he’s been instructed to claim when asked.  He stands beside our table as we eat, serenading us with a Khmer tune that we’re not sure he’s even aware he’s singing!

From brunch of chicken and rice in front of a large circulating fan, we make our way back out onto the explosively hot street.  A tuk-tuk driver is lazing in the shade of his open cab on the corner over the road and as soon as he calls out “Hello Madame” we take him up on his offer.  We negotiate quickly (in his favour) before climbing into the shade and breathing sighs of relief.  He drives us a few blocks up to the busy Tuol Tom Pong (Russian Market). 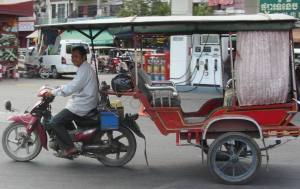 Inside the steaming undercover alleyways of the market we wander past rows of clothes, shoes and materials, into the food hall.  Fresh chickens and other slabs of meat hang from hooks, fish sit in large steel crates making their last desperate attempts at finding oxygen as they stare up at us in shock, and colourful fruit and vegetables line the wooden tables staffed by sellers sitting cross-legged at the back of the tables. 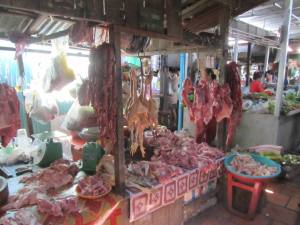 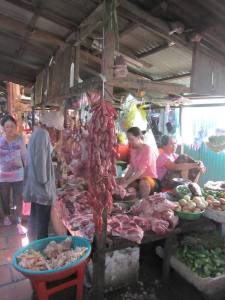 After a few worthwhile photographs we both realise that the heat is stifling and it’s time to go home and rest.  Another tuk-tuk driver wins the “uncomfortable tourist lottery” as we negotiate quickly and favourably with him to escape the sun’s rays.  An elderly and back-bent woman holding a plastic bowl comes up to the side of the tuk-tuk, hands outstretched to us and head bowed in reverence.  I guess her scarred blind eye is probably courtesy of the Khmer Rouge 40 years ago.  Random, brief and superficial encounters with such suffering are always perturbing.  We give her enough for a single meal and she smiles gratefully, waving and saying “bye bye” in English as we disappear through the crowded streets, never to see her again.  Where she goes, what she does, who she encounters, how they treat her, what happens to her for the rest of the day and the rest of her life are all questions which I will never have an answer to.  But her willing smile remains with me as a symbol of humanity’s ability to endure.