Despite having worked with Tuberculosis for many years now, my world is very largely without Tuberculosis courtesy of the luck which I was born into.  TB exists in Australia at an annual rate of between 5 and 6 cases for every 100,000 people.  In 2013 Australia, with a population over 23,000, notified 1,256 cases of Tuberculosis.  Many, though not all, of these occur in immigrants from high prevalence countries.

For over a year now, I’ve been living and working in Cambodia which is mostly a country of “withouts”.  In reference to TB, the tables turn and it becomes a country of “withs”.  The annual rate per 100,000 people is 715, which translated in 2013 to over 39,000 cases for a population of slightly more than 15 million people.

Before leaving Kampong Cham one recent Sunday, Bea, one of the doctors and I were out on a bike ride through the rural villages.  En route home we visited the young girl whose father had reported his concerns to me over his daughter’s regular migraines which have not resolved after some years.  During the informal clinical assessment he presented us with her health documents, which included a TB treatment card showing she was diagnosed and treated last year via her local village health centre.  Finding someone in Australia who was ever treated for TB, let alone in such recent times, whilst out and about on other matters, would be an incredibly rare find indeed.  Here, it is par for the course.  This is a practical example of the difference between TB rates in the two very different countries.

Today, 24 March 2015, is the 20th anniversary of World TB Day which was initiated in 1995 by World Health Organisation and has been recognised annually ever since.  Needless to say, Cambodia and countless other places have been alive with TB health promotion activities.  Teams were in market places and on the streets, delivering messages related to this year’s theme, of reaching the estimated 3 million people thought to contract TB disease each year without ever being diagnosed or treated.  This theme was started last year, and continued this year to promote it’s significance.

My old team have apparently had a fun day, out and about at various locations spreading the message about TB.  I was highly amused to find a photograph on Facebook of Chom, my tuk tuk friend, standing in this year’s green t-shirt alongside a dozen or more of my old team, at my old office!  His services were recruited to hang one of the canvas banners from his tuk tuk, with a loudspeaker attached to his roof, playing messages about TB as he putted his way through town all day.  That’s a solid day’s work for someone usually reliant on the rather unreliable tourist population, in competition with any number of other tuk tuk drivers.  About three years ago his father in law, Microphone’s grandfather, died of TB.  Another example of the fact that in Cambodia you don’t have to look far, to find connections with TB. 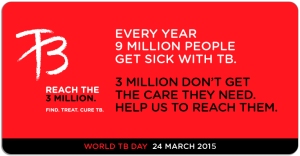 In 1993 the United Nations instigated the first annual World Water Day, which is now held on 22 March every year.  On Sunday organisations throughout the world promoted messages about water and sustainability.  Thankfully I had already left Kampong Cham when their water supply shut down, which occurred sometime last week, continued over the weekend including throughout World Water Day, and remains in progress as I type.  Some areas are now into their second week of having no water at all.  None of MSF’s staff have access to running water, all are bathing by hurling pots of water over themselves from remaining tank water which is also running dangerously low.  Apparently it is a very uncomfortable state of affairs.  I left town at the exact right time!

MSF is currently supplying the hospital with two truckloads of water each day to keep things operational until the town supply is recitified.  This will probably be done by pumping river water directly into the town wells as a temporary measure.  A combination of no rain for months and high temperatures causing rapid evaporation has caused the town’s well water to dry up.  Locals report spending $2.50 per day on bottled water just to survive.  This is unaffordable to many if not most and no doubt contributing to the overburden of illness which already exists.  Many, such as Dara and the others in Shackville, are unaffected because they already live without proper access to water.  Shackville’s water supply is a homemade pipe system made by Dara’s father and colleagues, which extends from the Mekong, up the bank, over the road, and down into the concrete tubs sitting outside their tin shacks.  Every evening during the sunset traffic cruise which brings Kampong Cham alive, thousands of bicycles and motos drive over these pipes, which are protected by strips of wood placed parallel against the hoses as they pass over the bitumen.  Vehicles make contact with the wood sitting alongside the hoses, rather than the hoses, keeping them from traffic damage.

The point of recognition days such as World Water Day and World TB Day is to raise public awareness of their respective issues.  For those of us from the wealthy world it is extremely easy to incorrectly think that neither of these subjects pose a risk to us.  As an example, a very commonly held myth in Australia and New Zealand is that “TB was eradicated”.  For those in the poor world, promotion of accurate messages about both issues is a difficult and complicated thing to achieve.  Low literacy, stressful living conditions, mixed messages and priorities related to immediate survival make the delivery and processing of messages convoluted and difficult.  This is hardly surprising given the low levels of informed opinion which exist in the developed world.

On Thursday I’m leaving Phnom Penh for some time to visit friends and travel in Europe.  My excitement is tinged with flashes of the young blind woman in her remote village, who has fallen out of two elevated houses already.  When I return later in the year, the Mekong will be flooded and there will be no way of visiting her.  During recent visits to Dara in hospital I’ve met a number of other patients including a 12yo boy who is currently hospitalised with a deformed arm, which he broke falling out of his house.  This seems to be a common phenomenon in a country which requires houses to be elevated for the flood season.  It is connected to another common phenomenon – drowning.  Last year at a work conference held at a resort I had a really fun time swimming with my Khmer colleagues.  Young and fit, none of them swam as fast as me, which was clearly related to the fact that I received training as a child and have a proper swim stroke.  One of my colleagues asked me if I had taken swim lessons as a child and when I replied affirmatively he said “we don’t have swim clubs in Cambodia.  In Cambodia, if we don’t swim we drown”.

Yesterday I picked up Dara and his mother in a tuk tuk I negotiated for the day and we traveled to the city, spending about seven hours sightseeing together.  Mum, who cannot recharge her mobile phone because it requires reading numbers and instructions, had her phone in her hand all day and took more photographs than me!  She pointed to Phnom Penh’s tallest skyscraper (there are only two) and explained that she had been a construction worker on this site some years before Dara was born.  I took some photographs of her with this building in the background.  Below is a photograph of the same skyscraper, taken from a friend’s apartment a couple of weeks ago, with a construction worker on another site, in the foreground of this city landmark.  Clearly being a sightseer instead of a worker in the city, was a remarkable and new experience for her and it was special to share this time with her.  Inside the Royal Palace grounds I joked that I was staying in one of the fancy apartments across the manicured gardens from the Silver Pagoda.  She believed me!  Which is very similar to the perceptions that my Central Australian indigenous friends have of “whitefellas”, who they seem to imagine have no limits either financially, nor regarding possible high-falluting connections.

As we walked through the Royal Palace yesterday, Dara hopped along on his crutches with his one leg and I pondered about Tuberculosis, drowning, unsafe water, falling, traffic accidents, landmines, disease and all the other “withs” which accompany Cambodian life.  While I flit off to the other side of the world at great expense, the only “withs” in my life being privilege and advantage, what delights will Dara and so many others I know and love, face during (but regardless of) my absence?  Why do I get so much while others get so little?  As an MSF colleague who is currently in Sierra Leone on an Ebola assignment says, we have to make the most of our privilege whilst at the same time helping those who weren’t born into our extremely fortunate circumstances.  The problem for me is finding a balance between decadence in my favour and basic assistance in others’ favour.  I want to enjoy the decadence my lifestyle affords me but forevermore it will be tinged with flashes of Dara, the blind lady, Kim in Siem Reap and his extreme struggles, and so many others who cannot even imagine the “withs” in my life and their opposite connotations to the “withs” in a world that is “without”.  Life is certainly not black and white and I hope that upon return to Australia I can retain the insight I have developed of my infinite advantages in life.

2 thoughts on “Worlds With, Worlds Without, Worlds Apart”