When you are poor in a poor country there are many things which will kill you prematurely.  Stress is likely the prevailing, but not the only culprit.

Right now the Coronavirus Pandemic response is becoming a major issue for millions around the world, increasing food insecurity and hunger as well as having a negative impact on other disease responses, such as Tuberculosis and Malaria.  The results of this blanket response are going to be long term and catastrophic to the world’s poorest and most vulnerable.

In Australia where the virus has transmitted somewhat (6,800 cases and 95 deaths), we have shut down our economy to halt viral transmission.  This has been done in an environment of enormous levels of government protections.  Stimulus packages to protect small business and the unemployed have been implemented.  We see frequent televised daily press conferences updating us on the virus’ epidemiology including how much testing, how many new cases, how many deaths, when and where, recommendations for personal protection, as well as information about new or changing regulations.  More recently we are being informed of when, where and how restrictions are being eased as viral transmission has started to flatten.

In comparison, Cambodia, where there have been 122 cases and 0 deaths, with no new cases reported in over three weeks, has also shut down.  There are no government stimulus packages or other economic protections, limited quality information to the general public, and low levels of health literacy in the population meaning people are genuinely and extremely fearful with seemingly very little reason to be.

Added to this environment of hunger and fear, a new law was implemented only a few days ago, relating to traffic infringements.  The alleged reason is to reduce the number of road accidents.  The National Road Safety Committee reported that in 2019 there were over 4,000 road accidents with almost 2,000 deaths and a further 6,100 injuries.  Some of the new laws appear to be appropriate, for example penalties for drink driving, failing to wear a helmet or talking on a phone whilst driving.  However, as with the blanket lockdown in a place without Coronavirus, the authorities have implemented some blanket laws which completely disregard the poverty experienced by many who rely on very old motorbikes as their only form of transport and can’t afford to buy official documentation.

According to social media, the owner of this motorbike is a man whose wife is sick.  He has been fined US$200, an amount he can never raise, for his moto not having the right documentation.  He uses it to get around in a quiet rural area, posing almost no risk.  After my observations of the poor trying in various ways to afford necessary health care, I imagine he is already exchanging costs of food with costs of medications.  With no way of raising the $200 fine, he tried to sell his moto but was only offered $100, meaning he still has $100 to raise and now with no form of transport in order to do whatever he can for income.  It seems a form of strangulation. 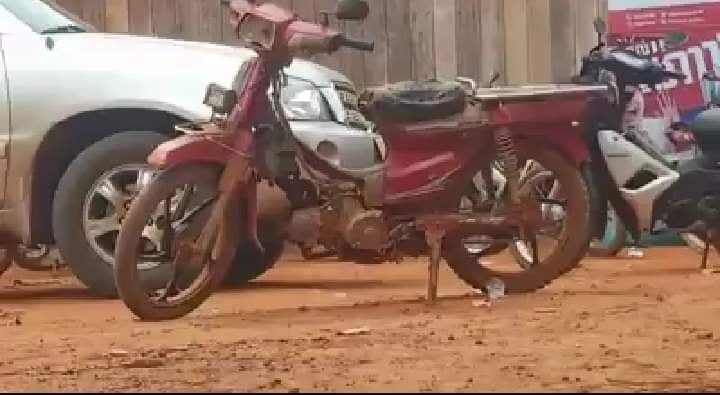 This photograph depicts a man lining up at one of the many police checkpoints, holding his home cooked lunch in a plastic bag.  The reason this lunch has been highlighted, is to point out that he can’t afford to spend $1.50 on streetside rice, instead bringing food from home, but carrying food on his moto is the reason he is being fined.  Another common sight at these police checkpoints is cash in the hands of officers, something that I had never seen until I visited Cambodia.  Apparently the conversations at checkpoints like this start with the officer stating “if you don’t need a receipt we can fine you less” (meaning the cash can bypass official channels and go straight into the officers’ pockets).  General local consensus seems to be that these laws will ensure new cars and homes amongst the police force.  Given the very low official salary of Cambodian police, and the very nice cars parked at checkpoints, evidence suggests some truth to this rumour. 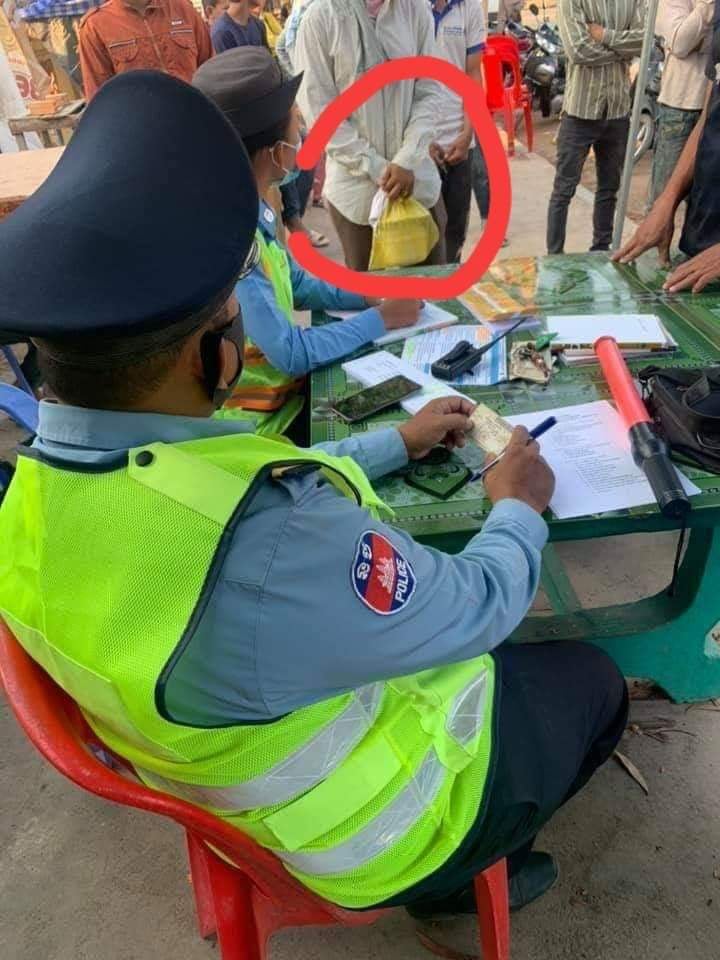 At the best of times, the world’s poorest face high levels of stress and are constantly vulnerable to tiny changes such as new laws.  In this time of pandemic response, it seems even more untenable than ever, that instead of being cared for and protected, Cambodians are being further exploited and strangled.  The impact of 2020 may take the wealthy world a year or two to recover.  But what of the world’s defenseless?

To end on a slightly more cheery note, last month I received an unexpected number of donations for Cambodia, mainly by people who had heard some of my updates about the current situation there.  It was good timing although also tiny drops in a very stormy ocean.  I sent a large chunk of it to Kung Future who shared these photographs of a food distribution activity which our donations assisted. 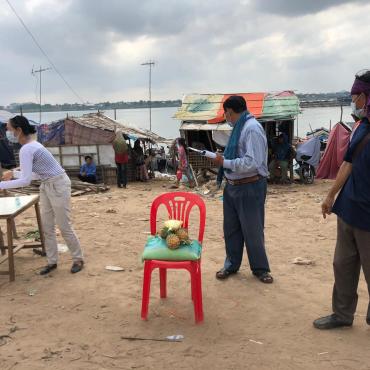 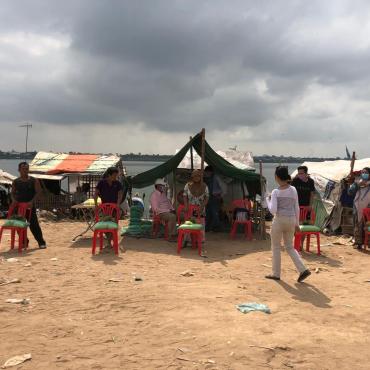 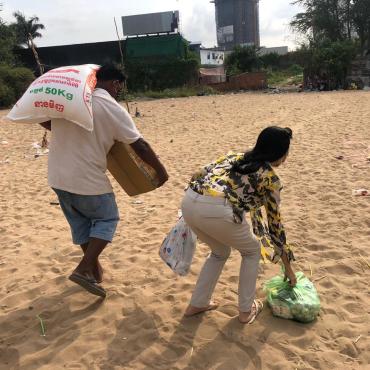 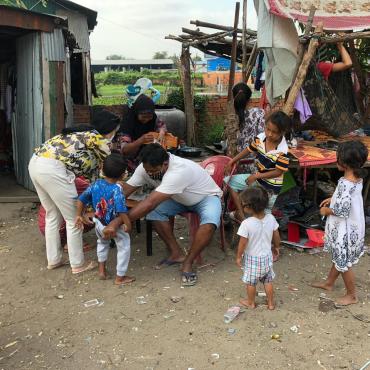 Food supplies were delivered en masse to some of the country’s most impoverished on the shores of the Mekong.  Staff placed supplies on well spaced plastic chairs as a way of encouraging social distance measures amongst eager crowds.  In the slums, previously naked children were clothed and their families fed.

My experience of Kung Future is that they run on a tiny budget and enormous hearts.  Local staff largely influence decisions rather than expatriates, an important distinction to me after experiencing the machinations of European colonialism alleging humanitarianism.  100% of Kung Future’s work is done on the ground – in slums, on riverbeds, climbing into canoes to tend to the sick and disabled, even wading through waist-high flood waters during monsoonal weather.  Donations to large NGOs will never guarantee this level of authenticity or local benefit as expatriate staff and bureaucratic behaviours soak up large amounts of donor funds.  Find a small and authentic NGO if you want to make a genuine difference.  Donations to Kung Future can be made online at their website, https://kungfuture.org.

Unable to be there, the photographs cheered me from afar.  During pandemic lockdown Australians are experiencing higher rates of mental health concerns and domestic violence.  We are internet shopping at high rates, likely as some form of therapy.  Perhaps then, it’s a good time to share this mental health reminder: 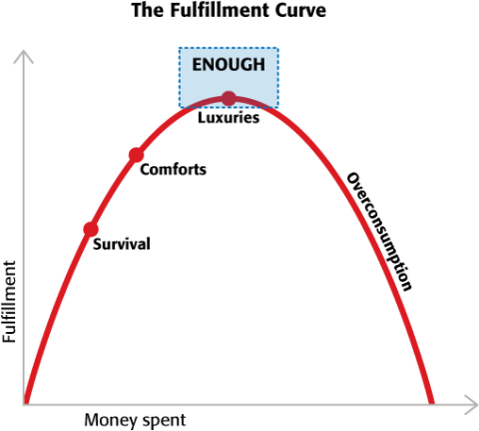 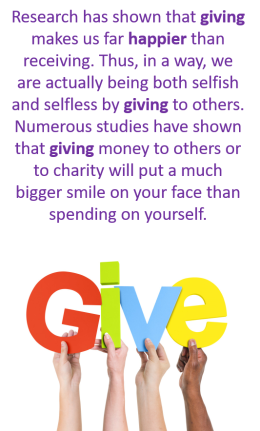 Found at It’s more important to be happy than rich and The Science of Generosity: Why Giving Makes You So Happy

One thought on “Grab Some Happiness”